It’s my birthday this week and Joy and I were having a hard time deciding what to get each other. There aren’t any new videogames out that I want and with the new Mini I’m pretty set electronically. So I told her that I’d been thinking about getting a new mower for a few months. There was nothing wrong with our current mower, an electric Black & Decker Lawn Hog (or some such creature), but I haven’t been able to stop thinking about something even more “green.”  When I told her about it, she said “if that’s what I really want…” and we were off to Lowes! 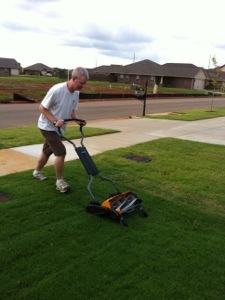 So, this is my new lawn mower. It’s the Fiskars Staysharp Max Push Reel Lawn Mower. Yup, it’s one of those old-timey reel mowers. But this ain’t your Paw-Paw’s mower! It has a chain-driven inertia drive that keeps the blades spinning after you’ve built up the momentum so it’s super easy to cut with. This kind of mower is supposed to be better for your lawn because it snips the blades like scissors instead of tearing the tops of the stalks off like a rotary mower does. The cut width is the same as my electric mower, 18″, and it’s not self-propelled (neither was my electric), so I’m not having to make a huge adjustment. I do like that it cuts just as well whether I push it fast or slow and there’s no cord to worry about cutting! It’s super quiet too so I can new listen to my audiobooks while cutting the grass.

There’s not much else new. I’ve been busy doing “man” things like installing a 220 volt outlet and fluorescent lighting in the garage so I can use my compressor and air tools and see what it is I’m doing out there with them! I put in another full day yesterday working on Pokey. Every weekend I think this is going to be the one where I get Pokey finished and send him off to paint, but I’m about 95% there. Got a little more cleaning to do in the cabin with the wire wheel and the fenders to massage a little so they fit better.

Joy and I had some fun this weekend in our wonderful old home. We came back from a dinner on Saturday night and found that several rooms in the house either didn’t have working outlets or the lights were out. On top of that, the heater wasn’t working… the lights were on but no one was home, so to speak. So, I ran out to the garage and checked all of the breakers, and all was well. I donned my winter gear and trudged outside and checked the breakers on the heater unit. Again, all fine. I even poked my head up into the attic and crawled around under the house looking for evidence of varmint infestation and sabotage. No such luck.

Frustrated, I called my local Aire-Serve rep and close personal friend to plead for help. He examined my A/C unit and the breaker box and discovered that we were only getting 90 volts instead of the usual 120 on one of the line coming into the house. If you don’t know a lot about house and electricity, you are supposed to have two lines, each carrying 120 volts, come into your home at the meter. Obviously they combine to 240 volts to power your heater, A/C, and dryer or they’re split to 120 volt panels in your breaker box to run the outlets and lights in your home. Most of the devices in our home simply weren’t getting enough juice.

So we called the Huntsville utilities and within an hour, a line crew was out to diagnose the problem. Turns out that one of the lines coming into the house was at fault. They couldn’t say much more than that, but the line would have to be replaced. This is no small ordeal because the line is underground and most likely runs under a concrete patio that a previous owner poured. Thankfully we won’t have to pay for that work, but while the line crew was installed a booster transformer (temporary fix), one of the workers noticed the main switch in the breaker box was pretty much toasted. So even if the main lines were fixed, there would be no guarantee that the power would stay on.

Joy and I then went off to Home Depot and Lowes in search of a replacement, but neither stocked such a big item from such a distant era (our house was built in the 70’s). Once again my buddy Mike at Aire Serve came through and found a replacement switch. We called Mr. Electric to install the switch and make sure everything else was copacetic. They swapped out our main, cleaned up the breaker box (imagine spaghetti wires!), and even installed a 220 volt outlet for my air compressor that’s been sitting idle for the last year! We got a pretty good deal and the men from Mr. Electric were extremely helpful and courteous. We highly recommend them if you have any questions or electrical problems with your home.

Now we’re just waiting for Huntsville Utilities to come out tomorrow and lay down some new power lines to get our battle station fully operational once more!

With the colder fall and winter months coming, Joy and I thought it would be a good time to finally put our unused (read: broken) fireplace to good use. We were told when we bought the house that the fireplace was broken and not to use it. A quick inspection by a gentleman from the local fireplace store revealed that the metal fire box which resides behind the lovely brick facade wasn’t close enough to the bricks and the seemingly harmless 1/2″ gap could actually be very dangerous. As you can see in the photo below, it appears we have a lovely brick hearth.

Actually there’s just a small metal box behind that brick wall with a stove pipe going up through the roof. With a wood-burning fire in there, the heat and occasional ember could make it through that tiny gap and set fire to the exposed studs and sheet rock back there.

Since colder weather is here in the Tennessee Valley, all the home improvement stores are putting out there fireplace accessories. While we were at Lowes one day, we spotted a great looking set of electric fireplace logs made by Dimplex. When plugged into a 110-volt outlet, the embers in the wood glow and flames dance across the back of the unit. Additionally, there is a fan and two-stage heater inside that help add some warmth to the ambiance! The whole unit was only $200, installed in 15 minutes, and comes with a nifty remote.

After testing the logs out, we decided to keep them until we could install a vent-free gas fireplace insert sometime in the next few years. So now we had a fire, but we still had an ugly brick faced wall staring at us. We decide to dig up the paint swatch for the den walls and take it to Lowes. We had a gallon of the darker shade on the paint chip mixed up and after priming the bricks, we laid some color on top.

As you can see in the after picture, the whole project (which only took a few hours) made a huge difference in the room! Joy and I can now simply pick up the remote, “start” a fire, and sit back on the couch and finally enjoy our fireplace.

UPDATE: Here’s a video I found on YouTube of what the flame and ember effect actually looks like:

You and I have bought our first home! After finally paying off all our debts, we were quickly able to save enough for a down payment on a great house in Madison, AL. It’s a beautiful centrally-located 3 bedroom rancher. It has a 2 car garage, a swimming pool, and LOTS of room! If you’d like to see pictures of our new home and witness the remodeling as it happens, check out our Flickr photo set.

Joy and I would like to thank Roy Claytor and his team, especially Lea Ellison for all the help and hard work finding our new home. If you’re moving in the Huntsville/Madison area, we’d like to recommend the Roy Claytor team for all your real estate needs!