By Sunday, Joy and I had settled into a morning routine. Waking up around 6:30 and get showered and dress so we could run down to the lobby for a donut or bagel with some hot tea for me and a latte for Joy. Then it’s onto the shuttle to the Con. Our first stop for the day was to check out the artists’ gallery and comic illustrators at 10am. We had the good fortune of getting there early  enough to get 3rd and 4th place in line. There was a group of Avengers roller-derby girls near the doors but we couldn’t tell if they were trying to get in or were just there to pose for photos.

We told the gentlemen ahead of us in line that we were Dragon Con newbies and didn’t exactly know what we were in line for. He said this was the line for the comic artists and illustrators. He had a sketchbook that he had been taking to show and cons to get some of his favorite artists to sketch in. He said his first stop as soon as the doors opened would be Tim Hale’s table. He’s the artist that came up with the design for this years Dragon Con badges and for the first hour he would autograph your badge for free and do a headshot of one of the characters he draws. We didn’t have anything like a sketchbook so we got our badges signed and since this was our first Dragon Con, it made them extra special mementos.

We then toured the comic artists’ gallery and saw some spectacular art! We would have lived to take home several hundred dollars worth of it, but we carefully narrowed it down to two selections, a 10th Doctor Who in front of the TARDIS and a Green Arrow print, both signed by the artists.

Of course, since it’s Dragon Con, we ran into some people in some awesome costumes, like this Guardians of the Galaxy couple: 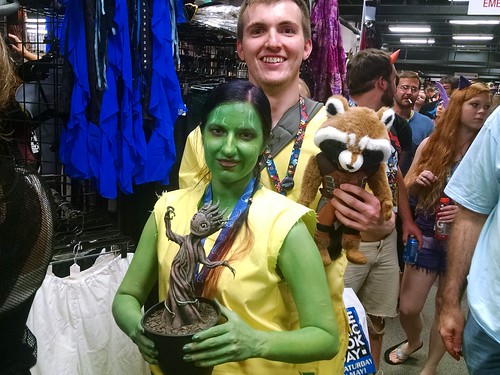 and Ash from The Army of Darkness:

With our prints secured, we ran around the block looking for a place to lunch and a kind gentleman in an information kiosk on a street corner suggested a place called the Corner Bakery. We ate quickly so we could hurry to our next panel, “Boardgames! Boardgames!” This was a great discussion led by Darwin Bromley, co-founder of Mayfair Games. He shared with us some of his favorite games and what he thought were going to be some of the best games coming out this year. Needless to say, we’re going to have to increase our budget for games this year!

Here’s some of his picks:

After the panel we meandered over to the next hotel to queue up for the Karate Kid panel. We got there super early so had a long wait but we got great seats! We got to listen to Ralph Macchio and  Martin Kove (the Cobra Kai sensei) share their thoughts and reflections on Karate Kid and their careers. 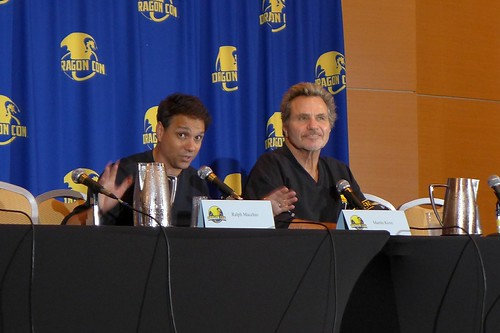 That was or last panel for the day and for Dragon Con. We made the final hike to our shuttle pickup and retired to our hotel for the night. Joy and I had dinner in the sports grill downstairs and went out to the lobby to play some Rivals for Catan and Dungeon Roll in the hopes we could entice some other weary Con-goers to join us. Sadly, none did so after a few games, so we turned in for the night. 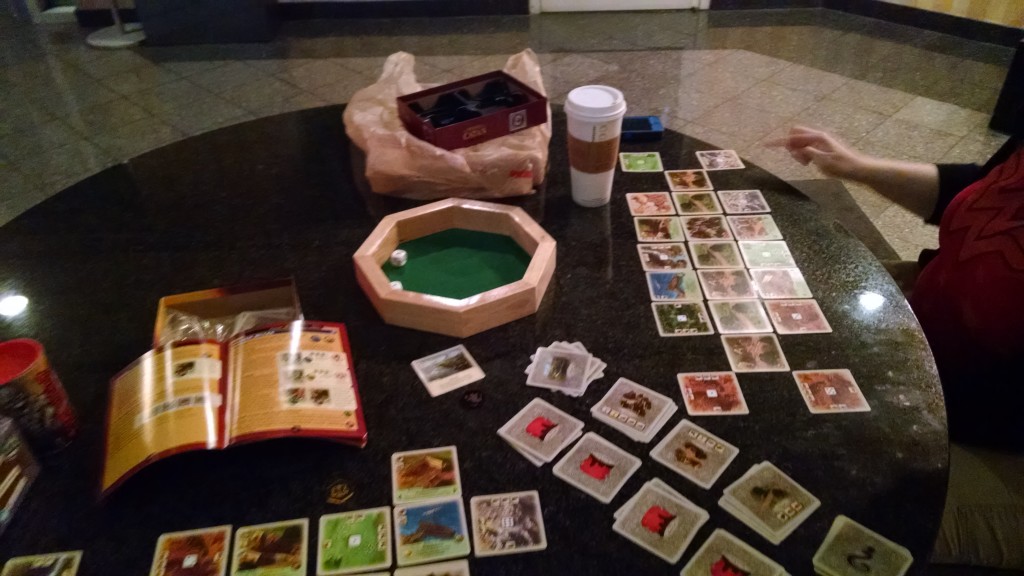