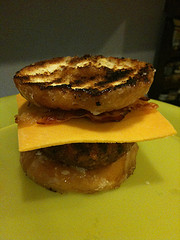 Joy and I had a great Labor Day weekend this year. We had our usual breakfast at Little Rosie’s on Saturday morning and afterwords we ran a few errands. When Joy settled in for her usual weekend nap, I snuck off to the walking trails to get some road time on my new recumbent. Even though I haven’t ridden in nearly a month, I was able to effortlessly ride to the end of the Indian Creek trail and back twice! Cycling is SO much easier on a recumbent.

On Sunday, we had a few friends over for a cook out and some Rock Band. I told everyone to bring swimsuits, but just like the last time I invited my family over to swim, one person doesn’t bring their swimmies and suddenly no one wants to swim. So, we fired up the grill early and made perhaps some of the best cheeseburgers on the planet: The Krispy Kreme Bacon Cheeseburger!

We found this idea on the internet and decided to give it a whirl. It’s simply a regular bacon-cheeseburger but instead of using regular buns, you cut Krispy Kreme donuts in half and grill them (insides facing down on the grill). Everyone was a little squeamish at first, wanting to “half” a burger with their neighbor, but after a few bites, everyone unanimously agreed that they were awesome! The sweetness of the sugary donut complimented the smokiness of the burger/bacon and worked really well with the sharp cheddar. I think grilling the donut halves was key, because everyone knows a Krispy Kreme donut is 100 times better when the Hot Light is on! The grilling also crisped up the bun so it wasn’t a soggy mess under the weight of the burger.

Believe it or not, we still managed to play a round of Phase 10 and several sets in Rock Band and no one slipped into a sugar-induced coma. Would I make the KKBC again? Absolutely! We just have to find a Krispy Kreme without the hole in the middle.